To learn about the deep needs of both female founders and ecosystem players, we launched in November 2018 a global campaign “Time to be 50inTech” with a survey. We recruited over 50 ambassadors (women and men). Personalities like Cindy Gallop, Geraldine LeMeur, Suki Fuller, Brian Solis, or Céline Lazorthes supported us and helped us reach a great number of respondents all over the world.

It was a huge success! In less than 2 months we collected a large amount of data from as much as 450 respondents including 60% female entrepreneurs. A majority of them being based in Europe, but they also came from North America, Africa and Middle East, and Asia…

And this is what we found out 👇

1. At 80%, female founders are business focused

In our study, we unveiled the fact that female founders were really business oriented. Their number one priority is to develop their business (80%). Raising funds comes after (53%) maybe because they indeed are less funded.. And finally, they are looking for quick actionable advice and mentoring.

Not surprisingly, raising funds is the biggest challenge for female founders. Convincing clients (corporate especially) and recruiting tech talents come just after and before finding co-founders.

Our study revealed that they want to network. Who with? Mainly with women in tech, entrepreneurs and investors.

The study also shows that everyone is committed to closing the gender gap. The respondents are ready to take actions such as attending events, sharing their experience, and participating in AMA online sessions to help it happen.

Only 37% of female founders want to be interconnected with accelerators and incubators. Even though more than 50% of them never got support from an accelerator or incubator.

But, with such a male-centered accelerator’s model is it a surprise? Laetitia Chabannes, program manager at the camp accelerator in Aix-en-Provence (France) shared: “ It’s really difficult for us to attract female founders and receive applications. We launched a thinking process with our team to try to understand why this is happening… Many female entrepreneurs told me that they were not able to leave home and stay away from their families for as long as 3 months. Male founders don’t react the same way. We have received plenty of applications of founders who recently became Dads and that was not an issue. We are now thinking about creating new programs that would be shorter and could be combined with online sessions”.

4. Good news: the ecosystem is willing to diversify the deal flow but… people are looking in the wrong place

We asked investors, corporates, accelerators, and incubators if they would like to receive more applications from female founders: at 73% they said YES! As we speak, female founders applicants are hard to find. Why? Because startups are mainly sourced from social networks, recommendations, and conferences. This is clearly not where they stand and it confirms the need for a qualified pipeline of promising women-led startups: this is 50intech’s ambition. 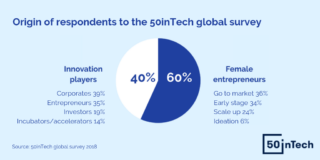 Subscribe to the 50inTech Newsletter.
A Newsletter for the Smart & Game changers

This website uses cookies to understand your use of our website and give you a better experience. By continuing to use the site or closing this banner, you agree to our use of cookies. To find out more about cookies and how to change your choices, please go to our Privacy Policy.Ok