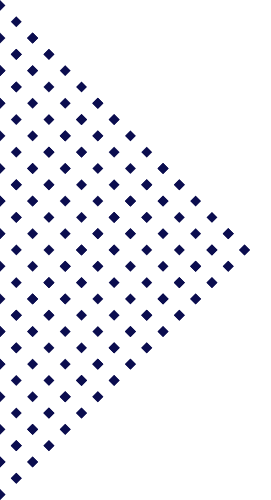 The partnership between 50inTech and Figures - the salary benchmark startup - reveals the real gender pay gap data in Europe. The topic of gender equality, though not unique to start-ups, is becoming increasingly important, particularly in reference to pay. And women are raising their standards and becoming empowered to negotiate and earn their worth… as they should. 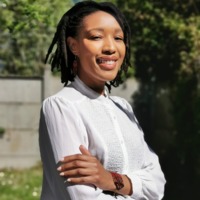 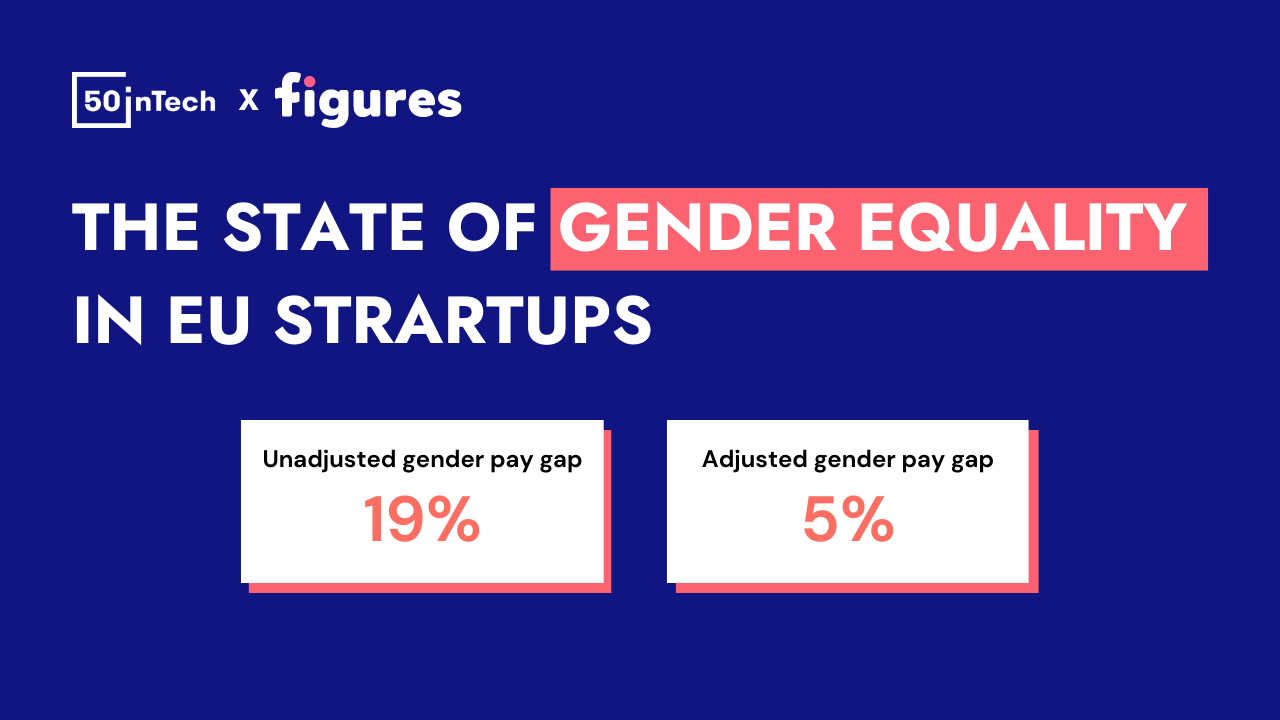 The topic of gender equality, though not unique to start-ups, is becoming increasingly important, particularly in reference to pay. Being at the initial stages of business, start-ups are in a good position to implement the best initiatives to achieve equal pay and close the gender pay gap from the start.

We are proud to partner with Figures - the salary benchmark startup - to reveal the real gender pay gap data in Europe.

The competition for talent is at an all time high and the challenge for companies is to have the best teams to increase their market share. As we know, the most successful teams are those that are balanced in terms of gender representation. In case you don’t already know, women are raising their standards and becoming empowered to negotiate their salaries and earn their worth… as they should.

This is why we are particularly proud of our partnership with Figures to highlight actions promoting equal pay between women and men, such as;

This partnership aims to help companies figure out employee’s compensation packages and salary bands in your salary grid, a task that can sometimes be complicated if you lack direction.

After consulting over 70 inclusive companies partnered with 50inTech, we found that the vast majority are aware of the gender pay gap from the onset, and many are taking concrete actions to lead with equal pay.

We’re proud that 30+ of our clients are on the list of the 522 companies across Europe using Figures.

Equal Pay is one the most demanded diversity, equity and inclusion (DE&I) actions from our community, another reason for this partnership.

But what is the difference between pay equity and pay equality?

Pay equity is about paying people in the same role or doing comparable work, with the same professional characteristics equal compensation. If you keep this metric at the base of your equitable compensation strategy, the likelihood of having a gender pay gap is already decreased.

Wait, it doesn't stop there. Something else that we need to pay attention to is pay equality. Oh yes, it’s a different concept altogether - pay equity and pay inequality are not interchangeable.

Pay equality adds an extra layer by looking at the impact on salary because of unequal access to opportunities. For instance, if women in tech were proportionally distributed across the pay scale as men are, we would achieve gender pay equality. But that’s usually not the case. In fact, Figures report how gender stereotypes play a part in the promotion and fair pay of women in leadership positions, so unfortunately it’s no surprise that only 17% and 29% of women occupy C-Level and VP positions respectively. If women were considered for promotions and higher earning jobs at a proportional rate to men, we would achieve gender pay equality - the same concept applies to other marginalized groups such as people of colour, people with disabilities, people who are part of the LGBTQ+ community, and other minorities.

So what does this mean for companies? It means that companies need to break down all systematic barriers to inclusion, to achieve equal access to opportunities and then equality. Look into your gender pay gap data and ask yourselves the following question:

Are our employee salaries based on objective metrics for recruitment, performance, advancement and compensation?

No? Well then there’s some work to do, and Figures is a great starting point.

With their compensation app, start-ups and scale-ups alike can use Figures’ European benchmark data and innovative salary indicators to inform their compensation policies, and of course improve pay equity. That’s just scratching the surface, there is so much more to the app that you can learn from their website. The best part? It simplifies a companies salary determination process and provides accurately sourced figures (excuse the pun).

How, as a candidate, can you ensure a commitment to equal pay?

Although the movement to close the gender pay gap is gaining momentum at national and international levels in the EU and globally, many companies are still inactive and trailing behind - it’s just not good enough. For the candidates, there’s nothing more reassuring than knowing that your potential employer is committed to equal pay, right?

What you can look for in terms of data to get a better idea of your potential employers engagement:

How to negotiate your salary?

We have the masterclass you need!!

Last year we hosted our second annual “What I Really Really Want” Bootcamp to help empower women when it comes to salary negotiation and it was a hit, once-again. Why, you may ask?

Because all the women who participated in the event and who applied the advice obtained between 30 to 50% salary increase!!!

Women in Tech - we are here for you & we will make the changes this industry needs to get you equal pay all day, every day, together!

We have partnered with many company’s with leaders that have shown a commitment to equal pay and using tools like Figures for guidance. What it’s proved is that it’s never too early to act for change.

Companies - what will you do to empower and help women in tech feel more secure in knowing that they are being paid their worth at your company? Join us

Talents - Join the movement, find your next position, take advantage of our free bootcamps and masterclasses throughout the year that target our four pillars that we consider important for the inclusion of women in tech: 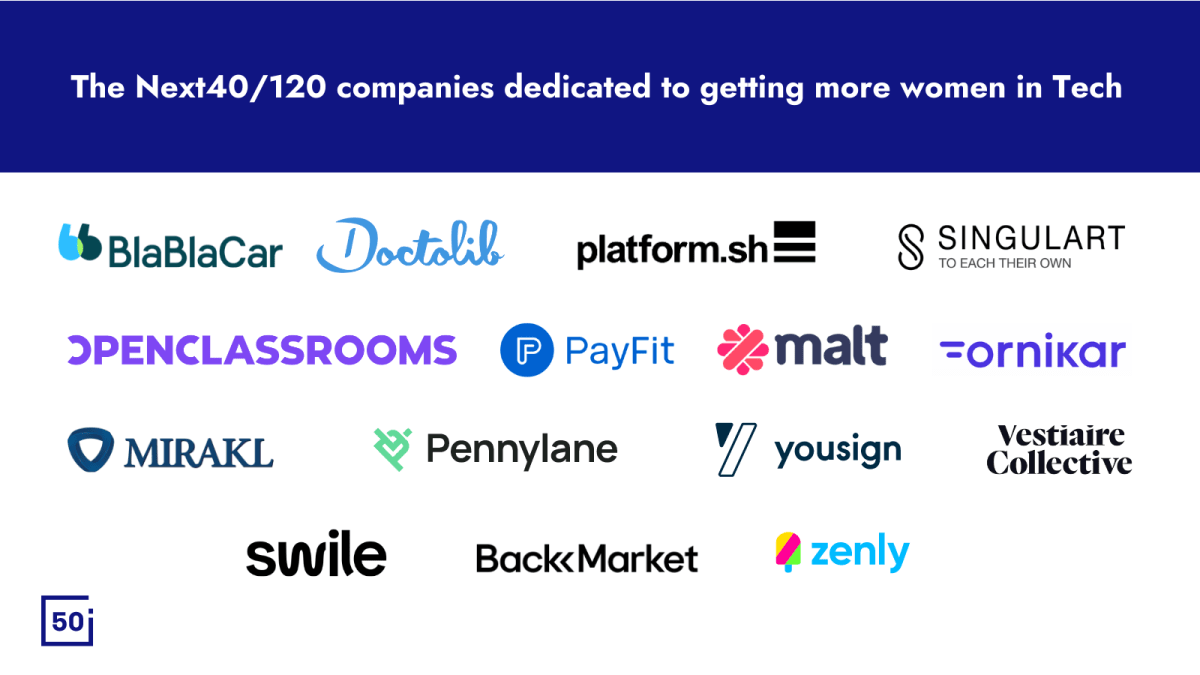 Next 40/120 Companies Dedicated To Getting More Women In Tech

Did you know that 15/40 of the Next 40/120 French Tech companies are dedicated to being inclusive to #womenintech? Partnering with us at 50inTech means that these 15 companies have strong commitments to the following: equal pay, fair career path, flexible working and anti-discrimination policies. 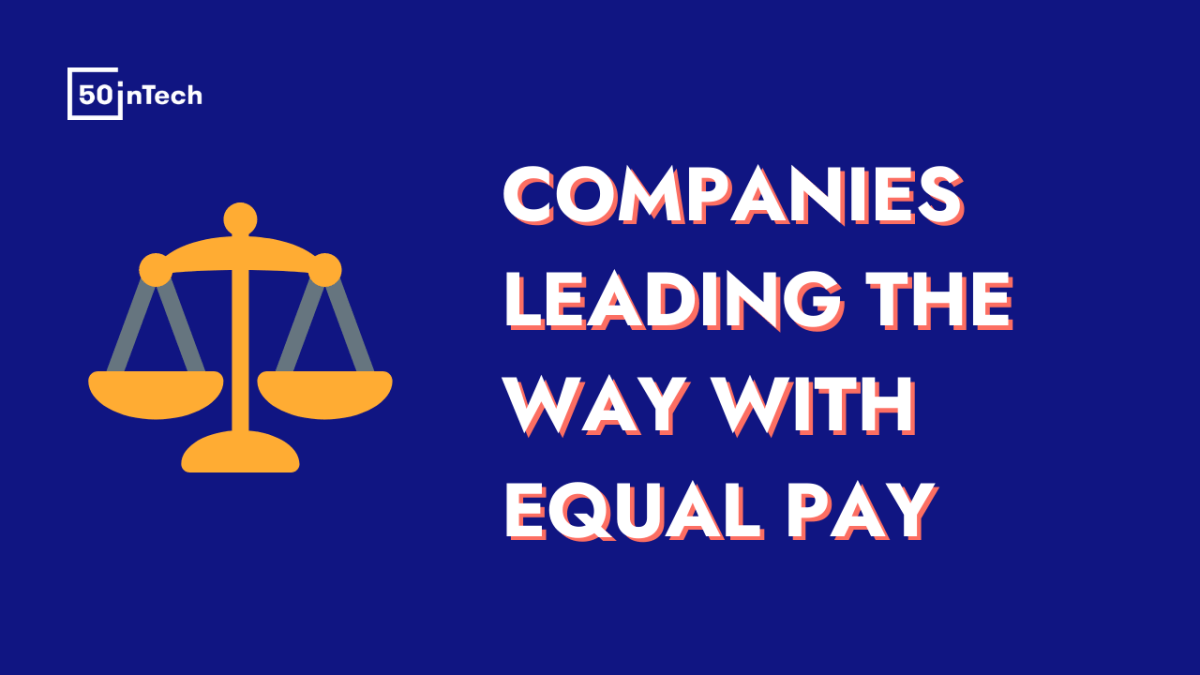 The hot topic on everyone’s lips right now, and should be on your mind when considering your next workplace and overall career satisfaction is that of Diversity, Equity and Inclusion (DEI)... more specifically, equal pay.